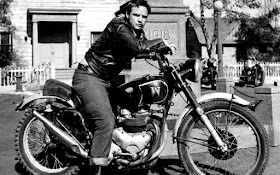 The whole thing was born, they say, in the late 1940s, when most ex-GIs wanted to get back to an orderly pattern: college, marriage, a job, children –all the peaceful extras that come with a sense of security. But not everybody felt that way. Like the drifters who rode west after Appomatox, there were thousands of veterans in 1945 who flatly rejected the idea of going back to their pre-war pattern. They didn’t want order, but privacy- and time to figure things out. It was a nervous, downhill feeling, a mean kind of Angst that always comes out of wars… a compressed sense of time on the outer limits of fatalism. They wanted more action, and one of the ways to look for it was on a big motorcycle. By 1947 the state was alive with bikes, nearly all of them powerful American made irons from Harley-Davidson and Indian (now defunct).


In the terms of our Great Society the Hell's Angels and their ilk are losers – dropouts, failures and malcontents. They are rejects looking for a way to get even with a world in which they are only a problem. The Hell's Angels are not visionaries, but diehards, and if they are the forerunners or the vanguard of anything it is not the "moral revolution" in vogue on college campuses, but a fast-growing legion of young unemployables whose untapped energy will inevitably find the same kind of destructive outlet that "outlaws" like the Hell's Angels have been finding for years. The difference between the student radicals and the Hell's Angels is that the students are rebelling against the past, while the Angels are fighting the future. Their only common ground is their disdain for the present, or the 'status quo'.

Far from being freaks, the Hell's Angels are a logical product of the culture that now claims to be shocked at their existence. The generation represented by the editors of Time has lived so long in a world full of Celluloid outlaws hustling toothpaste and hair oil that it is no longer capable of confronting the real thing. For twenty years they have sat with their children and watched yesterday's outlaws raise hell with yesterday's world ... and now they are bringing up children who think Jesse James is a television character. This is the generation that went to war for Mom, God and Apple Butter, the American Way of Life. When they came back, they crowned Eisenhower and then retired to the giddy comfort of their TV parlors, to cultivate the subtleties of American history as seen by Hollywood.